Krispy Kreme recently opened a pilot vending machine at its headquarters shop in Charlotte, North Carolina.  If the test is successful, future machines will be placed in locations where they can be stocked fresh daily by production shops or doughnut factories. 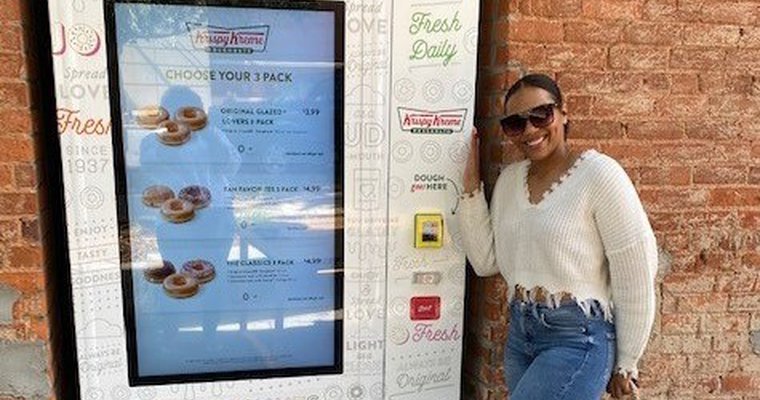 A customer peruses the machine's offerings.

When it comes to doughnuts, Krispy Kreme knows how to get the word out. The 83-year-old brand built its reputation on hot glazed doughnuts made fresh daily in its retail-production shops — offering guests a first-hand view of doughnut making.

The company has been expanding its reach to new markets and new shop platforms. Most recently, Krispy Kreme opened a pilot vending machine at its headquarters shop in Charlotte, North Carolina.

Located in the South End neighborhood, the vending machine is built into the brick exterior of the company's new Global Product and Innovation Center. In an area known for its active night life, there is now an option to purchase fresh doughnuts 24/7, offering standard three-packs of Krispy Kreme's most popular varieties.

"We want to be known as a brand that reaches guests where they want to be reached," Levi Hetrick, vice president of shop development, told this website.

The neighbors have been very receptive to the new platform that debuted a few weeks ago. "It received a lot of hype on its own with the local Charlotte media, before the shop even opened," Hetrick said. "It shows the love people have for the Krispy Kreme brand, but also the potential of automated retail."

Since opening, "It has been surprising to see people want to engage with the machine even though they had just been inside the shop and buying," said Hetrick.

The prices in the machine are similar to those in the store, but rounded up to include tax. The machine does not offer any limited time offers and accepts credit/debit card and mobile payment only.

The idea for the machine was born out of a willingness to have 24-hour availability while the company was developing its Charlotte innovation center, Hetrick said.

After considering a walk-up window, the team decided a vending machine made more sense. Company leaders were first introduced to the various options of modern-day vending machines at the National Retail Federation's Expo in New York City.

"We really didn't know what kind of offering we wanted," Hetrick said, as they spoke to different equipment providers. One of the first decisions was whether to make the product visible to the consumer, as in a glassfront vending machine design. The other option was a closed-front touchscreen that did not display the actual product but offered an interactive customer experience.

They opted for the touchscreen.

"It looks fine on the shelf, but it's not highlighting the 'star of the show,'" Hetrick said, referring to the doughnuts which are sold in a packaged state. "It's a fresh product, but it's pre-boxed."

The touchscreen, on the other hand, can be used to advertise instead of merely displaying product. "You can put some full content on there that draws someone in," Hetrick said.

Digital Media Vending International, the hardware manufacturer and interactive software supplier, provided guidance throughout the design process. This included integrating brand imaging and video into the DMVI's user interface functionality, making it a uniquely Krispy Kreme experience and a natural extension of the brand.

The machine is a controlled, refrigerated unit, keeping the doughnuts between 65-to-70-degrees Farenheit to maintain their quality standard.

"Having a temperature control, no-drop system was really important to us," Hetrick said. The product can maintain its standard 12-hour shelf life, and is dispensed without concern of the dough and toppings being physically impacted.

As they prepare for busy hours and continue learnings on overnight usage, the waste factor during the beta phase is about 30%.

Even though the machine is currently being tested outside a Krispy Kreme store, Hetrick said the goal is to provide freestanding machines in high traffic locations such as airports and schools, where consumers will want the product but don't need to have an attendant.

"We wanted to test it as a platform for automated retail," he said. "Any place where there's high foot fall would be a great place for it."

Future machines could also be placed in Krispy Kreme stores with a lot of 24-hour traffic like the Charlotte store, he said.

If the test is successful, future machines will be placed in locations where they can be stocked fresh daily by Krispy Kreme production shops or doughnut factories.

"We could leave that open 24 hours a day, and it still has a fresh product in it," Hetrick said.

The machine does not serve the doughnuts hot, Hetrick said.

"We expect the next innovation to be to figure out how to deliver a hot doughnut," he said. "It is absolutely the number one question we get."

There are no current plans to offer the machine to franchisees, Hetrick said, although there have been inquiries.